Amy Johnson Crow at No Story Too Small suggested a 52-week challenge. It sounds like fun, and I plan to participate. 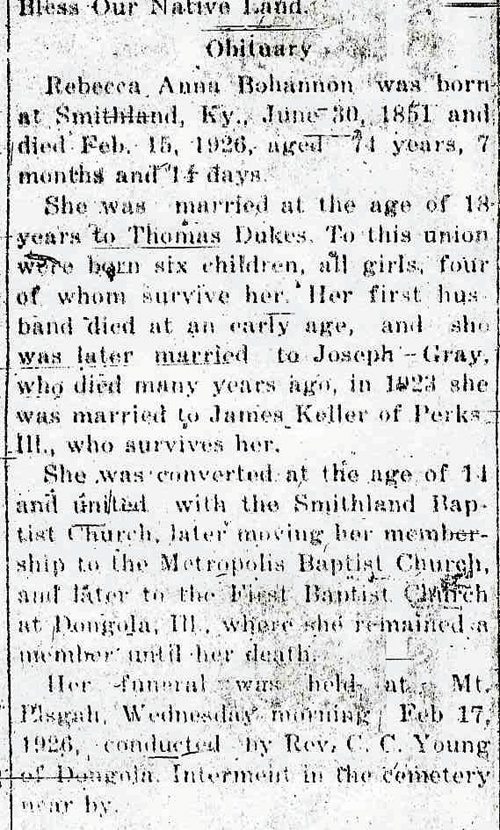 Rebecca Ann Bohanon was my great-great grandmother. It took me a long time to find out what happened to her because even though she died in Illinois where there is a wonderful death index, it doesn't help if you don't know the woman remarried.

Rebecca Anna Bohannon was born at Smithland, Ky., June 30, 1851 and died Feb. 15, 1926, aged 74 years, 7 months and 14 days.
She was married at the age of 18-years to Thomas Dukes. To this union were born six children, all girls, four of whom survive her. Her first husband died at an early age, and she was later married to Joseph Gray, who died many years ago, in 1923 she was married to James Keller of Perks, Ill., who survives her.
She was converted at the age of 14 and united with the Smithland baptist Church, later moving her membership to the Metropolis Baptist Church, and later to the First Baptist Church at Dongola, Ill., where she remained a member until her death.
Her funeral was held at Mt. Pisgah, Wednesday morning Feb 17, 1926, conducted by Rev. C.C. Young of Dongola. Interment in the cemetery near by.